Home » Types of Machete – Choose Best One to Use

There are different types of matches in the market. There is a great and long history of machetes that can become a cause of wonder for you. It’s really an awesome tool that is used for different purposes and the entire world has seen some unique types of the machete blades as well.

There are different models and kinds of a machete which is based on their uses and origins. Each one of them has its own uniqueness and feature by possessing distinguishable sizes and shapes. Their types and uses have really a close connection. Each of the machetes is designed to get an advantage in different situations.

Here we are going explore the world’s high-quality matches that have different uses and origins. 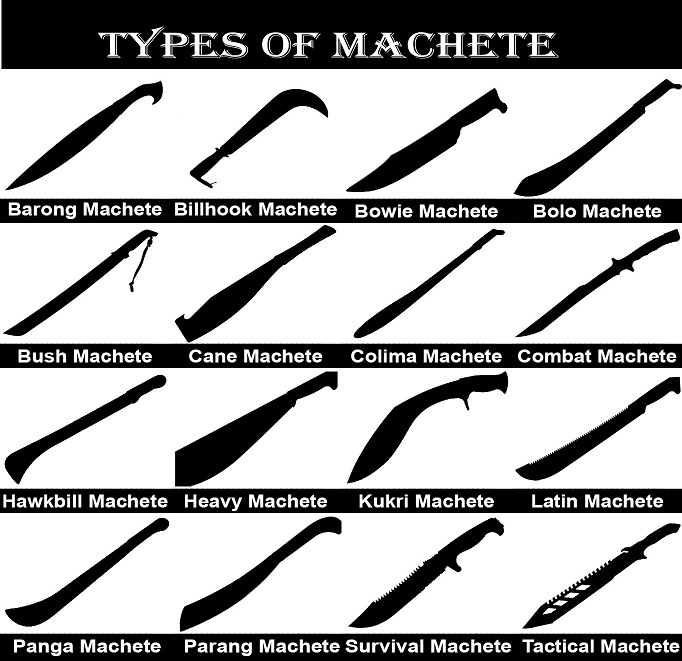 As most of the farmers and people are know that there are different types of matches in the market. Some are popular for the widespread recognition because of their versatility of use and sharpness. Other machetes are popular in their respective locals and regions. This article will help you to explore different and its uses in different fields.

Barong Machete is popular because of its high quality thick and leaf-shaped blades that contain on a single edge.  The origin for this tool’s blade is the Philippines and there are many ethnolinguistic groups who have an ancient history of this machete. Usually, they are slicing as well as heavy power of blades that are really amazing.
UsesAlternative NamesPlace of Origin
This tool is usually used for livestock slaughtering and hunting. The framers can also use this type to clear the vines and bushes. In the Philippine, the people have used it in martial and combat arts to give unique shapes.
Rawit, Barung and Moro Barong
The Philippines is the place of origin for Barong machete.

Billhook Machete is used in the agricultural field due to which it is known as a traditional tool. It is widely available in the wine-growing countries of Europe. Its heavy blades have straight shapes near its handle but it has a big curve towards its end part. Usually, from inside the blades are sharpened but you can also get both sides sharpened according to your uses.
UsesAlternative NamesPlace of Origin
This is one of the best tools for agricultural uses; it is very popular because of gripping and cutting the vines as well as trees with its inner curve. Also, the product is used to cut down the heavy brambles and shrubs smoothly.
Coa, Reaping Hook, Bagging Hook, and Sheaf Hook
Russian is the place of origin

The Bolo Machete is another best Pilipino origin blade. It is widely used in the United States and in Southeast Asia. This machete has a tip of the wider blade that will allow an extra chopping momentum to the user. You can also get the different types of Bolo in the market and each type has its own use. Jungle bolo is one of the most popular items which is especially design for the combat.
UsesAlternative NamesPlace of Origin
The uses of this knife can cover a lot of areas. It can be used for several purposes such as breaking a coconut, slaughtering animals or cutting the grass. You can also use it for the self-defense, wedding, harvesting the rice and digging the roots out.
Tapanga Machete is an alternative name of Bolo machete
The Philippines is the place of origin

This machete is from the United States and it is named after Jim Bowie who was a frontiersman of America. The knife has been designed into different types and it is very famous among the survivalists around the world. It is more like a great combination of famous Bowie machete and knife. The pointed blade’s tip makes it really a great deal in the survival situation.
UsesAlternative NamesPlace of Origin
It is known as one of the best survival machetes that have sharp blades. It widely used by the hunters and outdoorsmen for security purposes. It is also considered the best camping tool because of its excellent chopping feature.
Survival machete, large bowie knife, and wilderness machete
United State is the place of origin

The Bush Machete is also known with the name of Collins or Latin machete. Some people also called it a tradition machete. This is a unique and awesome item which is a type of all-rounder. It contains on the long blade with little or no curve. Towards the tip, its blade may also a wider shape. Because of its straight shape, the machete is similar to the Katana Machete.
UsesAlternative NamesPlace of Origin
As we mentioned above that these types of machete are used in a wide range of areas for several purposes. Its blades are specially designed to perform most of the outdoor works.
Latin-style machete is an alternative name for this machete
Latin America is the place of origin

It’s a great hand weeded cutting tool which is used for the cutting of sugarcane in most of the countries of South America and also in some other parts of the world. Just like a heavy machete, this knife has also a wide area of the blade. Its unique hook is attached at the tip’s backside which is not like Gator machete’s saw back. This is why the heavy and cane machete are closely associated with each other. When any blow is made both machete types have significant momentum and are forward weighted.
UsesAlternative NamesPlace of Origin
It is clear by the name of this item that it is specially designed for the cutting of sugarcane. But it can also be used for different purposes such as cutting the bamboo, plants, and paddies such as stalks. The heavy match is also used for a similar kind of tasks.
Camp cleaver, corn knife, cut, sugar cane machete, Aztec cleaver, machete de Suelo, Brazilian style cane knife, tunca, machete, and cancer
Hebei, China is the place of origin

The Colima machete is sharpened from both sides of the blade. It will best for the motion of sweeping cutting on fore as well as backhand strokes. It is specially weighted on the backside which is used as an aid for the backstroke clearing purpose.
UsesAlternative NamesPlace of Origin
It is considered one of the best machetes for the mowing of the large vegetation’s swaths.
Costeno, Acapulqueno, Panzon, and Caguayano
Central America is the place of origin٫

Hawkbill machete is hooked or curved machete which is sharpened inside the curve or on both sides. The sharpened tip of the machete concentrates the sharp point’s force which is best to cut hard material. The inner curve facilitates the stalked vegetation’s reaping as well as collecting.
UsesAlternative NamesPlace of Origin
Because of its sharpened blade, it is best for cutting the long grass. It will provide you a smooth cutting within a few minutes.
Cuma is an alternative name of Hawkbill machete
Place of Origin: N/A

Kukri Machete has another Best Machete with the sharpened blades, There are three main parts of its blade, one is a pointed tip used for the stabbing, second is a wide midsection which is used for the chopping and the third one is a narrow area near machete’s handle which is used for whittling and carving as well.
UsesAlternative NamesPlace of Origin
The kukri is a popular machete across Central Asia which has all-purpose utility blade.
Rawit and Gurkha Bladet
Nepal is the place of origin

Panga Machete is formed wild Africa and a bit similar to the Bolo machete. But as compare to the bolo its tip is sharpened and tend to be bit heftier that have deep belly with a slight curve. This machete is very common in the region of the Caribbean. Its sharp blades provide a great power of chopping because of its concentrated force
UsesAlternative NamesPlace of Origin
This item is more effectively used for the chopping of woods and vegetation. The piercing power of panga machete is used to accomplish different varieties of work.
Road or, Daga, Burriquito, and Liniero
Africa is the place of origin

This Parang Machete comes for South East Asia and it has contained on the long blade. It is one of the most famous machetes around the world which is known as a great handy tool. The Parang machete has a similarity with Golok machete but bother are different in a curve as well as slenderness. The Parang machete is longer and curvier as compare to the Golok. You can get the different types of Prang machete in the market that is designed for different purposes.
UsesAlternative NamesPlace of Origin
Parang machete is used for the chopping of vegetation, woods and other stalks as well. This tool can really take a lot of heavy beating among the different varieties of a machete. In the wilderness, this machete can really become your true friend.
Sable, Golok, and Bedog
Indonesia is the place of origin

Heavy machete is also known as a weighted machete, both terms can use for the same item. The weight is beautifully distributed in the design of the blade. This machete has a bulk of weight towards the blade’s top that makes the chopping of woody and thick vegetation really easier.
UsesAlternative NamesPlace of Origin
This machete has a great style and specially designed to chop the tough, thick as well as woody vegetation.
Double edge, tunca, guapote, barrigon, pulla, weighted, lampoon, carupanero, thunderhead, cuta, outback, and mojarra machete.
N/A

Survival machete is a great combination of all features. Its blades are really heavy which is used for splitting and chopping the wood. The blunt tip of the machete makes an excellent pry bar that will help you to provide great security in a rescue situation and it is great for the digging. The flat side of this machete can use for the pounding stakes and backside just like a saw.
UsesAlternative NamesPlace of Origin
This item is specially designed for the rescue, camping or for everyday use.
Coping and rescue machete
N/A

Latin machete is a long and thin shape that will help it to stay balanced while working. It is really convenient for the user to perform their task easier with this tool. It serves as a multipurpose tool and increases task efficiency.
UsesAlternative NamesPlace of Origin
This machete has various uses that depend on its different types. This machete is specially designed for everyday used such as cutting and chopping.
Bush machete is the alternative name for the Latin MacheteBush machete is the alternative name for the Latin Machete
Latin America is the place of origin

is containing on Japanese blade design that has an extremely strong point which is originally for the piercing armor. Its blade is sharpened and grip is good to hold the item safely.
UsesAlternative NamesPlace of Origin
The Reinforced tip of combat machete is used for piercing and stabbing purposes.
Military and Tactical Machete.
N/A

The Tactical Machete is used for the self-defense and for other specific purposes or your survival needs as well. These matches are specially designed as a slashing tool. If you are in the jungle and you got vine and you need to clear your path or campsite this machete will help you in this situation. It is also able to stab or trust effectively, it is sort of like sword and the handle is typical machete duties or it may have some other kind of other tactical functions just like sawing.
UsesAlternative NamesPlace of Origin
Its reinforced tip is used for the stabbing and piercing purpose.
Alternative Names:
Combat and Military Machete
N/A

These are some most popular types of machete that are available around the world and used for different purposes as well. You can choose the perfect machete according to your needs. Each one of them has some unique purposes so before buying any machete is important to complete your research to pick a perfect one for you.